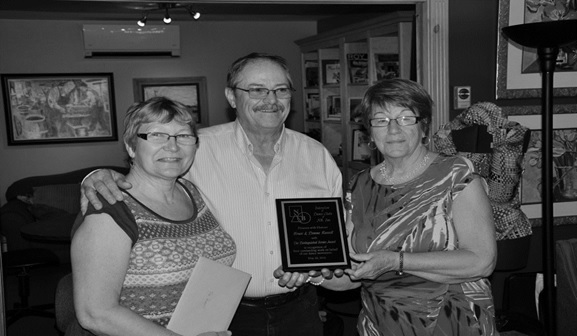 Bruce and Donna Russell began square dancing at the Derby Recreation Center to caller, Bill Skerry and they graduated in 1986.  They danced a few years in Derby and in Miramichi to Peter Linden.  In the late “90’s” they travelled to Moncton to learn to dance plus with Hoban’s Heroes.

Bruce then attended Callers school and Donna followed later on to learn the skills required to teach square dancing.

They are great promoters of square dancing.  They attended dances in Moncton, Fredericton, Oromocto, Saint John and others and usually took a number of dancers with them from the Miramichi to encourage and support other clubs.  They always encouraged dancers to support the Terry Fox Dance held in Penfield each year to raise money for cancer research.  They never missed one of these Special dances since they began and were guest callers at most if not all of them.  Last year they were honorary emcees for the occasion.   They also attended a number of National and Maritime square dance conventions.

They were involved in many activities in the Miramichi to try to promote and encourage new dancers to square dancing.  They held square dancing in the basement of their home, living rooms of others, community halls in Miramichi, New Jersey, Neguac, Blackville, Bartibogue and Burnt Church.  They would go anywhere to help grow the interest in square dancing.

Bruce and Donna Russell teach basic, mainstream and Plus at the Country Cousins Square Dance Club in Burnt Church.  They take a great interest in square dancing and give a great deal of their time in promoting it.

Our Club and the surrounding communities have benefited from their dedication and hard work in promoting and maintaining square dancing in this area.  The Federation of Dance Clubs of New Brunswick, Inc. congratulate Bruce & Donna on being recipients of The Distinguished Service Award.