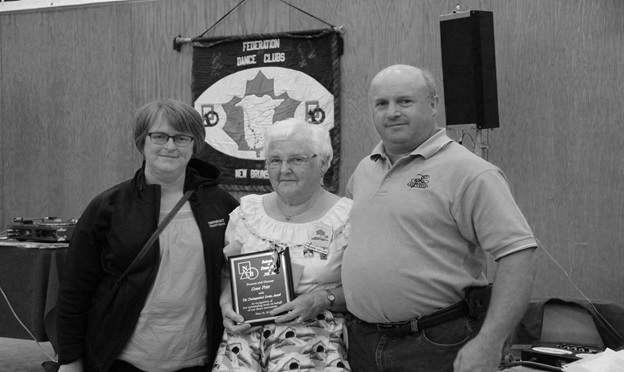 Erma and her late husband Herbie graduated from Elm Tree Squares in 1970 among the graduating class that had a total of 52 couples. They then began what was and is a long career in dancing and having fun. Erma & Herbie danced their whole time with the Elm Tree Squares & even after the passing of Herbie, Erma has continued to be a very strong supporter of the club on a weekly basis and still holds a committee position in the club being its Good Will committee person. Erma and Herbie were president couples of the club for 3 stints 1980-81, 92-93 and again in 2000- 2001. In 2002 Erma and Herbie were like most others in the province huge supporters of the National Convention held in Saint John working on a couple of committees and being what many would call good will ambassadors for the activity.

Erma and Herbie have attended several conventions on the National Level out west and here in the Maritimes, a few conventions in the New England area and most of the Maritime Callers and Cuers Conventions over the years. Even during the summer months if Erma could tear Herbie away from the business they could be seen dancing at a few of the Nova Scotia Festivals. Probably one of the most memorable for the both of them was the Festival in Yarmouth where they could be both seen dancing down on the waterfront that morning and having the time of their life. Erma has been busy within the club from the start. Erma being a matriculate seamstress and quilter, Erma had a hand in the design of the Official Elm Tree Dresses a few years ago. She has been very instrumental over the years with keeping the club abreast of all information, serving in so many capacities. Erma has continued to dance weekly since Herbie passed away a few years ago. Erma usually when time allows to dances each month at York Manor when the club dances for the seniors. She stills sees the value in the activity hence why she still supports in every capacity the club she holds dear to heart.

Erma is also quite busy outside the square dance activity. She is quite active with her church St Johns Anglican. She is specifically involved with the kitchen and fundraising committee. She is a great cook, attends bible study and Seniors Morning Out along with a multitude of other church activities. She exercises regularly with the seniors at the Johnson Avenue Seniors Centre. Erma is the mother of 3 children, 2 daughters Connie and Donna and one son Ronnie. Ronnie followed in his father’s footsteps as a mason taking over the business after his father’s passing. He is also an instructor at the Woodstock Community College in the Masonry Program. Erma does not let much get her down. She is currently following her grandson’s fight against cancer. Her grandson was granted a wish from the Children’s Wish Foundation and since then she has been a very large support of the Wish Walk held every year in Fredericton. All around Erma has a big heart for anything she gets involved with and is one of the large reasons we at The Federation of Dance Clubs of New Brunswick, Inc. feel she is deserving of the Distinguished Service Award.