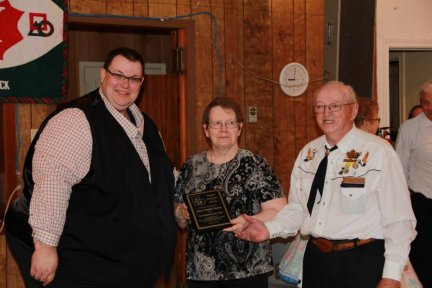 Gary & Maybelle started their dancing career some 30+ years ago while Gary was working on the Miramichi.  They took their lessons from Bill Skerry who was the caller for the group at the time in that area.  At times, during their year of lessons, Gary would be called away for work commitments. On those evenings, Maybelle still attended class.  She would then spend the rest of the week trying to teach Gary at home so he would be caught up for when they went back to class the next week.

As happens in most jobs, Gary and Maybelle found that they had to move several times.  They were destined to move from Miramichi and landed in St Stephen area for a few years.  They quickly took up dancing with the club there and kept very active.  As luck would have it, work took Gary & Maybelle to Grand Bay where they resided for many years and danced with the Ties & Frills.  Gary and Maybelle have been the anchor for many clubs holding many positions in a club throughout the years.  As luck would have it Gary had one last move for work in him which brought him back to Little Ridge and the family farm, where they reside today.  They, once again, became involved with Town & Country Squares In St. Stephen, and continue doing so today.

Gary & Maybelle have been a great support system to their club throughout the years.  Gary & Maybelle have helped out whenever asked and even if they weren‘t asked, they still helped out.  They have held the position of Vice President and President in the club over a four year stint and still remain active in the club.  As much as the Parkinson’s Disease has affected Maybelle she still comes most weeks with Gary to watch and talk with everyone.  On some weeks when she is feeling up to it she even does get up and try a couple of tips.  Gary still dances every evening with new class members.  Many a single lady who has come through the doors in St Stephen has had the pleasure to have Gary as their partner to learn.

Gary & Maybelle, like other dancers in clubs, are usually the first to jump up and help wherever help is needed.  Demos in the square, parade in Saint Andrews, demo at the nursing homes, cooking hotdogs for our annual Valentine’s dance each year, helping decorate and set up for special dances, dress up for Halloween parties and even once helped one of our members celebrate her birthday by sitting on the edge of her cake.  All things that many would say they have probably done but this couple do it without hesitation.  Even if you break an ankle and told not to dance come the next week and dance in a cast – that is dedicated to the activity.

Gary & Maybelle’s involvement in square dancing doesn’t just stop within the walls of our club.  For many years Gary has been the chief cook and organizer of the barbeque for the Annual Terry Fox Dance held each September in the Southwestern region.  He represented the club for a few years on the Southwestern Association Board of Directors.  Gary and Maybelle have travelled to several area dances, many a Maritime Square & Round Dance Convention throughout the Maritimes and even down to a few New England Conventions.

Gary is a respected Christmas tree farmer, active member of the local Western Charlotte Volunteer Fire Department, belongs to the Oddfellow’s in which he held the position of Grand Master for the Maritimes & New England states for several years and travelled extensively with them.

The Federation agrees that Gary & Maybelle are what many clubs desire; dedicated dancers who go that extra mile without ever being asked to do so.  Therefore, it is with the greatest of pleasure that The Federation of Dance Clubs of New Brunswick presents the Distinguished Service Award to Gary and Maybelle Pomeroy of the Town & Country Squares.