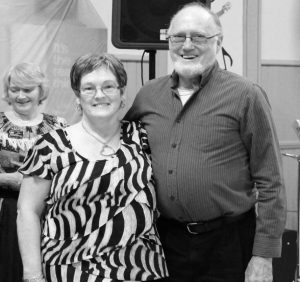 Back in the late 70’s early 80’s this young couple joined the square dance world to have fun and enjoy friendships that would last forever. Their dance lives took them to great heights and some lows that many will not forget.

This couple along like many couples have been hard working loyal supporters of their club at home and of other clubs in the province attending as many outside dances as possible.  They too have held many positions in the club over the years including President for several stints and Vice President Couple in which they will be finishing this year with their home club. Their time as President Couple has had its challenges.

The first challenge this couple faced was back in 1997 when the club suffered a great loss with the tragic accident one day in February that took the lives of their club calling couple Sidney & Mildred Bridges while Mildred was taking Sidney to the hospital.  The club was at an absolute loss. Their beloved caller had been so tragically taken from them in one fell swoop. Barb & Mel would not see the club end with this tragic loss. She spent many hours on the phone calling the numerous callers in New Brunswick and trying to see who could fill in the open Friday nights from February till late May when they would graduate the class that Sidney had started in the fall. This couple was successful in securing different callers for every single week after Sidney’s passing.  With the loss of Sidney and Mildred the club needed a new caller to take over their group. Mel & Barb worked diligently to make sure that every caller available was given the opportunity and made sure that everyone within the club had their vote on who would be the replacement. They helped the club move forward to where they are today. Had it not been for the hard work of this couple and of their strong dedication the club may have chosen to fold and pass on like their beloved caller.

Challenges as President Couple seemed to follow them for some reason. Following a dance in Fredericton at Elm Tree they, along with many others, were travelling home to St Stephen. Several had carpooled to make travelling easier. This couple happened upon Anderson’s corner to find an accident had taken place along the side of the road and stopped to offer any assistance they could. They were shocked to find that six of their own dancers were involved in a bizarre turn of events. Being in an area with no cellular phone coverage Barb stayed to tend to those injured while he went down the road to call for help. They remained at the scene ‘till every last one of their fellow club members was taken to hospital and then travelled themselves to the hospital to check on them that evening. Luckily enough only broken bones and shattered glass was the outcome of this accident and no lives were lost that April evening. Once again this couple facing another tragedy within the club helped them remain strong and surge forward to rise again.

They have supported the club over the years in many ways. For example, dancing at the Lyncourt Manor for the seniors where she has worked over the years or dancing on the blacktop at the opening of the Superstore in St Stephen, dancing in the town square during Chocolate fest or parading with other club members along the streets of St Andrews in the heat of July 1st. This couple has been there when needed.

These two deserving dancers have been instrumental in providing leadership for the club over the years, helping overcome tragedy when it arose and even helped in jump starting a tradition that is still being passed on today. They were instrumental on starting the Honorary Membership for the founding members the club in the mid 1970s. The lifetime membership included a badge, and free entrance to the weekly dance to thank them for the years of dedication.

We as a dance club would like to New Brunswick honour them with the Distinguished Service Award because we feel they have done more for the activity than any of us could ever thank them for.