There are many ways to recruit new dancers, but we believe this one is unique. The couple, we are going to honor today, used to take evening walks.

While walking they would pass by a house that had loads of good top soil in their yard.  Now, this was of interest to this couple, because they needed some for their lawn.  The wife wanted to go and knock on the door of this house, and ask the owners where they got the soil, but the husband, kept telling his wife NO!

One evening, the owners of the soil were out working in their yard, when the couple walked by, and the four of them struck up a conversation.  Before, these people left to walk back home, they had agreed to be picked up by their new friends, to go and try square dancing.

Now, the wife in this case, was not so sure about all of this~~she certainly did not want to go in the back seat of someone else car~~~because, if she did not like~~this square dancing~~~she wanted to be able to leave and go home.

Well, they stayed at the dance, and ended up graduating in 1999 from the Bayswater Weavers/Fundy Wheelers.  Now, we will fill you in on what they have been doing for the square dance world for the last 22 years.

Before long they became involved in  N.B.’s first Convention, 2002.  They acted as Chairpersons for the Banner Parade in Saint John, they made flags for all the Provinces and Countries in attendance, and he, designed the cover page of the 2002 Souvenir Booklet.

They joined the Board of Directors of the FDCNB in 2003.  2021 marks their 16th year on the Board.  They are currently the Convention 2022 Committee representatives to the Canadian Square and Round Dance Society (CSRDS).  They have been NB Federation Reps to the CSRDS since 2010.

During, their first six years on the Board (2003–2009) many changes took place in the NB Federation.  In 2004, they became the first provincial marketing committee.  She developed a membership retention questionnaire that was completed by dancers throughout NB.  She correlated the results in Power Point presentations for the Board that were shared with dancers throughout the province.  As a result, he designed and mailed five thousand introductory dance flyers throughout the province.  He, also designed business cards for every club to distribute to prospective dancers and mini brochures for places like doctor’s offices and information booths.  They worked with a graphic artist to develop the logo for FDCNB and prosed the slogan “Fun, Fitness and Friendship”, both of which were adopted by the Federation Board of Directors.  He held the position of Vice President for the final 2 years of their first six year term.

In 2005, when the Federation reviewed and relaxed its dress regulations based on the results of the dancer questionnaire, they visited every club in the Province to talk about and display the newly accepted Square Dance Attire.

He served as the first New Brunswick Webmaster; he designed the Web Page which was used for the 12 years he held the job.

She served as Chair of the Bursary Committee since its inception in 2013 (8 years).

They joined the Board of the SWNBSRDA in 2005.  He did on term as Secretary Treasurer and three terms as Association President.

For the first six years of the Terry Fox Dance for cancer research, they volunteered with the Fundy Wheelers/Bayswater Weavers.  For the next nine years, they did it under the SWNBSRDA, three of which were while he was President.

In 2010, they joined the CSRDS Board of Directors, he was elected Vice President, and she accepted the task of Editor of the CSRDS Directors’ Manual.

In 2012, early in their second term, he assumed the duties of the Acting/Society President for a six month period.  During this same period, he found it necessary to assume the duties of Membership and Insurance Chair, a position he held for the next four years.  In late 2013, the Canadian Corporations Act dealing with Not-for-Profit Corporations was completely revamped.  Consequently, By-Laws, Rules and Regulations, and the CSRDS Directors’ Manual had to be rewritten.  He worked in cooperation  with Bob Ruohoniemi, the Society President, on the By-Laws, Rules and Regulations.  She completely rewrote the Directors’ Manual.  This complete refurbishment of all major documents was completed within a four month period.

In 2014, he became President of the CSRDS.  He kept his Membership/Insurance portfolio and added that of Privacy Officer.  She remained as Editor of the Directors’ Manual and assumed the additional duties of Director for By-Laws and Regulations.

In 2016, and again in 2018 he was re-elected as President of the CSRDS.  They both continued with their portfolios.

In 2020, at the beginning of their sixth term on the Board, he became Past President of the CSRDS.  Some changes were made in tasks.  He became Chair of the Nominations Committee and Co-Chair, with her, of the Directors’ Manual.  She retained the By-Laws, and Rules and Regulations Portfolios.

During his tenure as CSRDS President, he represented Canadian dancers as an invited panelist of the ARTS Organization in Springfield, Ma.

They have presented numerous Certificates of Recognition for Club Anniversaries and Wedding Anniversaries throughout New Brunswick.

All of the new Maritime Camporees;

Many Provincial Festivals and Jamborees in Canada and the USA; and innumerable local festivals, special dances and anniversaries.

As you can see, this couple has certainly done their part for the square dancing activity.  They have attended dances at all local clubs, travelled extensively promoting dancing wherever they went.  They have also, promoted fun at the after parties, such as a “Screech In” to make many dancers “Honorary Newfoundlanders”.  Another fun thing was at a camporee, they showed dancers how to make and play an Ugly Stick.

We are sure that by now, you know this couple we are honoring, is Eric and Dianne McCormack.

Thank you for all your Hard Work!! 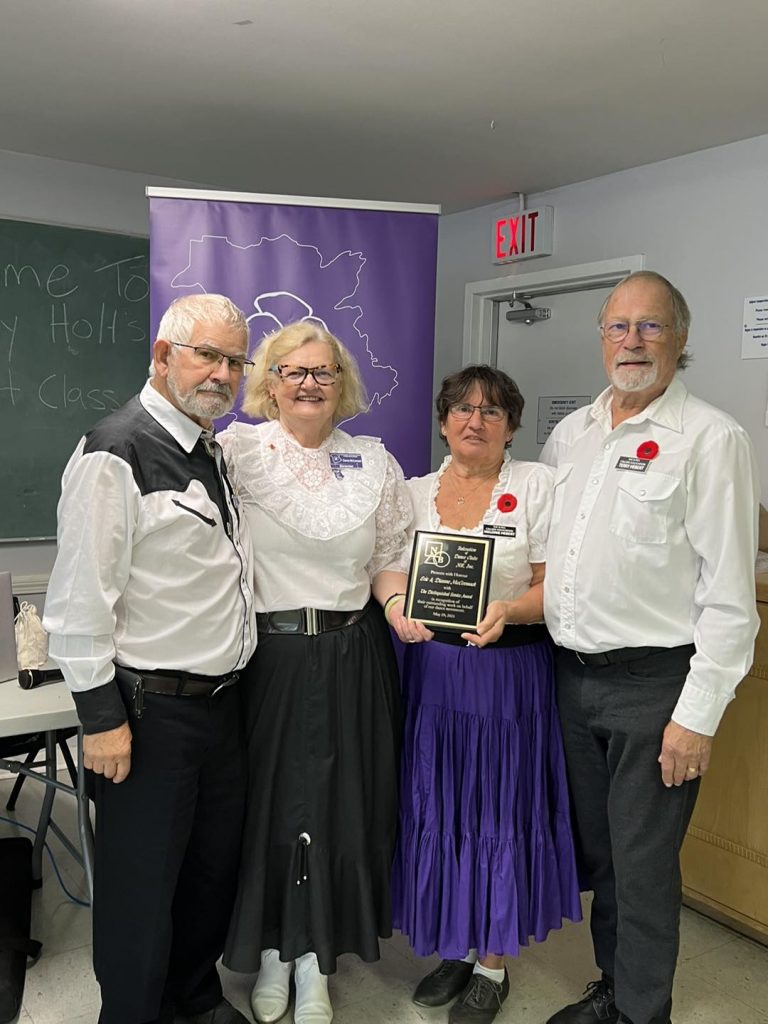