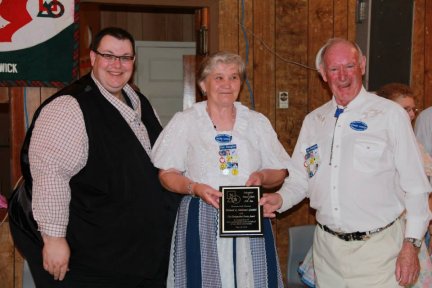 Richard & Traude started their dance career in the Pembroke area of Ontario where Richard was a school teacher for  many years.  After retirement, seeking a simpler quieter life, they moved to settle in the Cambridge – Narrows area, where they remain today.  They, like most of us, started dancing in Pembroke through friends coming to pick them up to take them out to a night of dancing to see if they would like it. And it stuck!

After moving to NB and settling into their life on the lake they looked for places to dance.  They danced in Moncton on Saturday afternoon’s with the Southern A Squares. While there, with some convincing by Bill & Phyllis Clarke, they decided to join dancing at the Gagetown Guys and Gals Square Dance Club. They remained with this club until its sad demise. Bill and Phyllis would stop in to Richard and Traude’s place and Bill would slide over in the seat most weeks and let Richard do the driving.  Even after the club closed in the mid 2000’s Richard & Traude would stop in and pick up Bill and Phyllis for a drive, be it to a dance or just for a dinner outing.

Around 2005 the Government of New Brunswick was giving out conditional grants to communities in New Brunswick to promote healthy activities.  Each community was given $5000.00 to be split in 2 segments.  One being to buy equipment to offer exercise classes of some kind the other half to promote social activity and a healthy lifestyle.  While at a meeting one evening in the Village the light went on in Richard and Traude’s mind that there could be a possibility of square dance in Cambridge Narrows.

Richard & Traude  approached the village and asked if they could make a pitch for part of the grant.  The Village welcomed the idea and offered them up a space to use for square dancing.  They, in turn contacted several caller’s to see if they would be interested in such a project; starting a club from nothing. Finally, one phone call caught when they asked Terry Hebert to call for the club.  That January evening they gathered in the hall not sure what to expect or who to expect. They asked a few local dancers who they knew already danced to be there in case no one showed.  Well much to their delight more than two squares of people showed up that evening to try it out – and the majority of them stayed.

That following November, the newly formed Washademoak Swingers graduated its first class of 18 new dancers. The club continue to be strong today.  A lot of the original dancers who came that cold January night are still there today.  Richard and Traude have stayed at the helm of this member run club since its existence.  Some refer to them as the President Couple of the club but Richard would be very quick to point out that he and Traude are by far not the President but more the contacts of the club.  The members are the Presidents of the club and hope it will remain that way for quite some time.

Challenge is something that all clubs face and Richard and Traude have helped this club like many others face challenges along the way.  They along with the members of the club have successfully hosted what is becoming the summer event of the dance calendar, the Strawberry Dance each July in Jemseg.  They help assemble the crew to go pick the berries and prep them for the dance they help with the sale of biscuits and berries at the end of each dance and are always there to help out when needed.  Their dedication to the club is like many others above and beyond, and it shows.

Richard and Traude have dedicated a lot of their free time to dancing.  Richard and Traude travel extensively to dances around the province, Maritimes and beyond our borders.  Richard and Traude have been members of several clubs in the province including Southern A Squares, Washademaok Swingers, Gagetown Guys and Gals, East Coast A’s and Fredericton A Workshoppers.  In addition to Canadian National Conventions, they have attended several MCCA Conventions throughout the years and could be found at a few New England conventions or taking part in dancing At Christie’s campground in Maine in May. They even completed a dream of theirs to dance at the top of Mt Washington taking the time to do so during a New England Convention visit.  Even while wintering in Hawaii they were part of the dance club over there. Dancing is a big part of their lives and they love the friendships they have made over the years and continue to do so today.

Richard and Traude have not slowed down much since moving to NB.  Despite health troubles at times Richard and Traude can be found doing the majority of the work around the property each year and when in their down time Richard can be occasionally found with a camera in hand snapping photos of a barn collapse during a hurricane or a dancer sitting on Santa’s knee.

The Board of Directors of FDCNB agrees that a great part of their story holds true in a lot of cases. However, their dedication to the Square Dance movement in NB, as evidenced by them taking the chance that night in January in 2005 to create a club, is well above the average and deserves recognition.   The FDCNB is honoured to recognize their determination and dedication, in supporting our activity and, therefore, it is with great pleasure that the Federation of Dance Clubs of New Brunswick presents the Distinguished Service Award to Richard & Traude Goodick of the Washademaok Swingers.