He started square dancing in 1987, graduating in 1988 from the Royal Stars Square Dance Club.  He started calling the same year he graduated from square dancing.  That summer, in the basement of his mentor at the time, he picked up a mic for the first time.  Since then, he has called for many clubs in the Maritime provinces, parts of Canada and as well as in the US.  He has been club caller for the Gagetown Guys & Gals, Oromocto Pioneers on two occasions, Town & Country Squares, Elm Tree Square & Round Dance Club, Washademoak Swingers, a stint with Woodstock Wheelers for a year and his own Round Dance Club.

In his career he has held many positions with different organizations—he has been Treasurer, President & Training Coordinator for the NBPEI Callers Association, he has been Vice President, President, Past President, back to Vice for close to 20 years with MCCA and is currently the Training Coordinator with Kerry Fletcher and, as well, Convention convener with Kerry.  He has been part of the organizing committee for the Canadian National Convention in 2002 looking after the clogging program and part of the 2010 Convention in Halifax looking after the square dance & clogging programs as well as helping with the sound.

Then life changed, she started dancing in 2010 and graduated from the club she is now President of in 2011.  She attended her first dance with him on only their third date.  One of the largest requirements of them dating was she had to understand his commitment to the activity.  I guess she really did not know what she was getting herself into, but she is still by his side today.

She has been President of the Elm Tree Squares for the last 5 years.  At times she has wondered what she got herself into but still smiles and keeps on going.

Together they have attended 8 Callerlab conventions across the US and have represented Canada as much as possible at each convention.  They have been part of the executive of the Federation for two different stints 2009-2014 then 2016 to current.   They currently hold the position of Past President, and Webmaster.  Together they have hosted several MCCA conventions in Fredericton.  He had hosted a few before they were together but as a duo, they are a force to be reckoned with.  She has been instrumental in the used clothing sale at the last 3 MCCA Conventions and for future ones as well.

Together they have hosted some of the unique events in square dancing.  From Plus Blitz days to a Leap Year Dance that seen over six squares on the floor at any one time.  They have hosted New Year’s Eve dances that sometimes not only had dancing but a lot of tom foolery happening as well at their dances.  They even included a square dance during their wedding festivities weekend.

Over the last five plus years, he has found a renewed love in round dancing.  He has really come in his own as a Round Dance Cuer and has even written some Round Dance songs himself.  He also was able to record his own Square Dance single with Rhythm Records, Dance Tonight.

Outside of the activity, he is busy with the business he and his father have built together over the years.  When he does have a little down time, he can if time allows be found out on the trails on the ATV.  She is busy with her job as an optician at Costco as well as Vice President of the Opticians Association of NB and National Exam Council representative.  She is busy with family as she has an exceptionally large one and he is busy catching up on what he can be doing in the activity to move it forward.

I am sure by the first line we all had a promising idea who we were talking about and really this is just a short bit of what they both have accomplished in the activity.  They are what we call true ambassadors to the activity as a whole and we are honored to present them with the Distinguished Service Award. 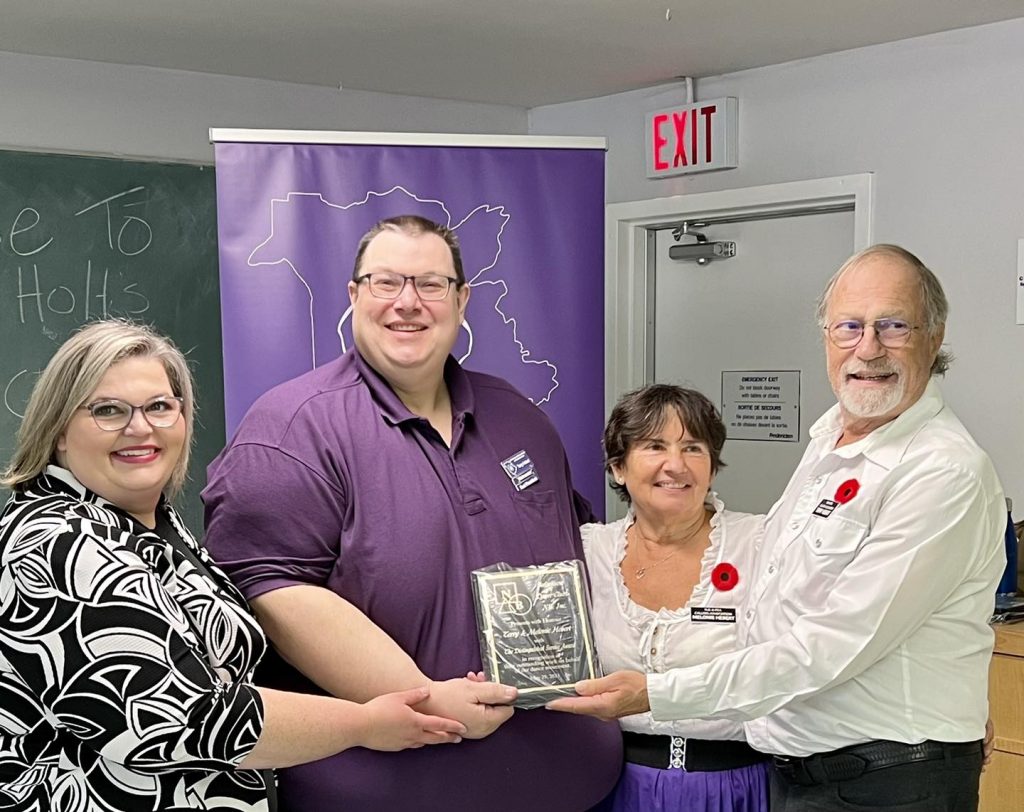